Can we not speak of fish?

Let me start with a story. Wednesday evening (May 26th) I checked my Twitter feed, and saw a number of tweets from Jonathan Eisen (phylogenomics), who was at the ASM meeting.

Jonathan is in the department of Ecology and Evolution at UC Davis, the author of a popular textbook on Evolution and a frequent blogger ("Tree of Life"). For those of you not used to reading Twitter feeds, note that the most recent tweets are at the top. 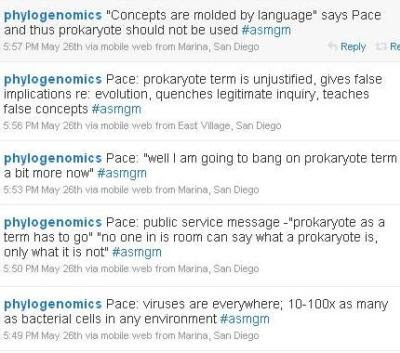 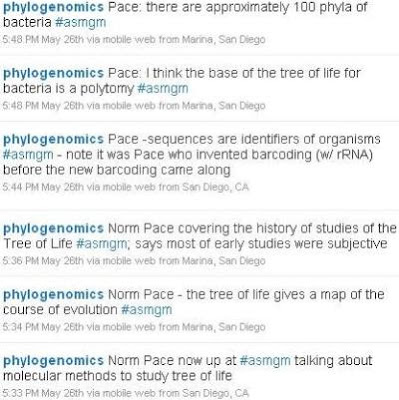 I know both Norm Pace and Jonathan Eisen. Thanks to Norm's personal style and Jonathan's excellent selection of quotes, reading this was like being in the room with Norm. I love hearing him talk. However, I do not entirely agree with him. I have spent my life studying gene expression in eukaryotes, and my perspective is that the differences between eukaryotes and other species ("prokaryotes") are fundamental. In prokaryotes, coupled transcription and translation (which is impossible when there is a nucleus) allows the widespread use of polycistronic mRNAs, which allow operons, which in turn contribute to many important features, including the ease with which biologically useful bits of genetic information can be horizontally transferred. The argument, repeated here by Norm Pace, that "no one can say what a prokaryote is, only what it is not" was addressed by Martin and Koonin, who proposed a "positive definition of prokaryotes" based on coupled transcription and translation. This, however, is not the point. The point is that the nucleus is a derived feature and prokaryotes are a paraphyletic group, meaning that the last common ancestor of all prokaryotes has descendants that are not prokaryotes. Nevertheless, the group is well-defined (as all life other than eukaryotes) and useful, so I commented:

A bit later, I commented again.

My point is that defining a paraphyletic group as the relative complement of one clade with respect to another makes it well-defined, and such a definition more closely suits what people have in mind. In the hypothetical example shown here, most taxonomists would want to list "natural taxa" (by which they would mean monophyletic groups, or clades), and would say something like "Q, R and S are slithy." To say "G other than C are slithy" is more compact because it makes reference to fewer taxa. To say "P are slithy" is exactly the same, and is the most compact way of making the statement, but requires reference to a paraphyletic group.

To pursue this further, I asked my colleagues what they thought:

My dear friends in systematics,

I have a question about systematics that I would like your opinion on. It seems a sufficiently central question that I suspect you have already formed an opinion. The issue is a practical one, regarding how biologists should use terms. It is also philosophical (but in the rigorous sense, relating to the idea that without a proper philosophical basis one cannot do science at all).

Is it ever right for a scientist to talk about W as a group?
You know the list (reptiles, fish, dicots, prokaryotes).

Back story.
This came up last night as an argument between Jonathan Eisen and myself, on Twitter. You can see most of it by looking at feeds for
phylogenomics, ongenetics and smount, but given the volatile and perspective-based nature of Twitter feeds I've pasted the relevant tweets into the attached word document (it reads from most recent to earliest so my might want to start at the bottom and work up). Jonathan is at the ASM meeting. He is a Twitter addict who has generated over 4500 tweets in the last year or so (a day with only 10 would be unusual for him). I find it useful and interesting to follow him. I am both ongenetics and smount (I didn't mean to switch but I changed computers and forgot to switch).

I find it useful to refer to prokaryotes (and to fish). Jonathan says "grouping together bacteria/archaea is inappropriate; I note in my evolution textbook we use "bacteria & archaea" a lot". Wouldn't it be simpler if he just used "prokaryote."? I'm looking for advice here.

I received a thoughtful reply from Chuck Delwiche:

Well, I'm basically with Jonathan on this, although I think I'm slightly more moderate. "Fish," "prokaryotes," "reptiles," "dicots," etc. are really form-classes -- they describe the appearance of the organism, but not its evolutionary relationships. Naming paraphyletic groups is somewhat less objectionable than naming grossly polyphyletic ones, so I don't object to naming the North American Drosophila in a way that ignores the Hawaiian species that are derived from within it (this an example of your C/G case). But it really is confusing to refer to prokaryotes. Although they have coupled transcription and translation, the are other aspects of DNA replication, transcription, and translation that show striking similarities between Archaea and Eukarya. If you talk about "prokaryotes" as if the term represented a lineage rather than a morphology then it tends to obscure both diversity within them similarities between Archaea and Eukarya.
The reason this is important is that hides the predictive value that a natural classification can provide. Within your group G there would be some taxa that are more closely related to C than others, and they will share properties with C despite the long branch and loss of characters you describe. If you treat "fish" as a group it is confusing that Teleosts have immune systems that more nearly resemble those of tetrapods than do those of lampreys or hagfish. I don't know anything about lung- or lobe-finned fish immunology, but I'll bet they are even more tetrapod-like than those of Teleosts. Much the same statements could be made for skeletal structure, tooth anatomy, ventilation mechanisms, and I don't know what all else.
This is why we Must Never Speak of Fish Again.
Chuck

This is pretty much what I expected him to say, but there are two things I'd like to note. The first is this "Within your group G there would be some taxa that are more closely related to C than others, and they will share properties with C despite the long branch and loss of characters you describe. If you treat "fish" as a group it is confusing that Teleosts have immune systems that more nearly resemble those of tetrapods than do those of lampreys or hagfish." This is a very good point that anyone who refers to paraphyletic groups must bear in mind.

The second thing that struck me is that he wrote "'Fish,' 'prokaryotes,' 'reptiles,' 'dicots,' etc. are really form-classes -- they describe the appearance of the organism, but not its evolutionary relationships" despite the fact that I had provided a rigorous definition in terms of evolutionary relationships. Defining "fish" as vertebrates other than tetrapods makes it something other than a form class, and also eliminates any confusion about whales. Defining prokaryotes as organisms other than eukaryotes makes saying "prokaryotes" synonymous with saying "bacteria and archaea." It strikes me that this is a natural group in the sense that if a new domain of life were to be discovered (perhaps on Mars, or deep within the earth) with coupled transcription and translation and no nucleus or mitochondrion, people would want to group it with bacterial and archaea, even if phylogenetic analysis showed that it shared a most recent common ancestor with the eukaryotic nucleus.

I will continue to speak of fish. When I do, I will be referring to vertebrates that are not tetrapods. While I respect and understand colleagues who will never speak of fish, they must understand that this group is well-defined in terms of groups they recognize. I hope that all scientists move towards a more precise taxonomic basis for the groups that they will continue to talk about.