Multicellularity has arisen independently several times, but most famously twice, in the two lineages giving rise to plants and animals. In fact, the last unicellular ancestors of these two lineages were not particularly closely related, and the last common ancestor of both plants and animals also gave rise to an enormous number of extant unicellular progeny, including all of the fungi. When I began serious work on the regulation of pre-mRNA splicing in plants in 2001 I did so with an awareness of how very similar the process is to pre-mRNA splicing in animals. This is all the more striking because so many species have lost this complexity. In fact, plants and animals share many processes that must have been present in the last common ancestor, but have been lost in many unicellular eukaryotes derived from that same ancestory. RNA figures heavily in the list, which includes microRNAs, U12 introns, the exon junction complex and complex alternative splicing.

Although the last common ancestor of plants and animals was almost certainly much more complex than most modern unicellular eukaryotes (at least in terms of its genome), it was probably not multicellular. The signals that control development in animals (wnts, hedgehog, FGFs, TGF-betas, etc.) are completely missing in plants. Likewise, the genes involved in meristem maintenance, ethylene-signaling, auxin-signaling and so on are missing in animals. It's also worth pointing out that the opisthokont clade (which includes animals and the fungi) is well-established (see the figure, which is from the Tree of Life Web Project).

Perhaps most convincing are the exceptions: the processes shared by animals and plants but missing from most unicellular eukaryotes are not missing from all. U12 introns were recently found in distantly related protists and in a fungus (see my comment). MicroRNAs were recently described in Chlamydomonas reinhardtii, a unicellular green alga (Zhao et al., 2007). There is even a miRNA family that is appears to be conserved between plants and animals and targets a homologous family of splicing regulators (Arteaga-Vazquez et al. 2006).

What is most interesting to me is the correlation between developmental complexity and retention of genomic complexity, including alternative splicing and miRNAs. It might not have evolved with multicellularity, but the ancient RNA toolkit might be very useful when it comes to building a complex organism.
Posted by Steve at 7/29/2007 03:44:00 PM No comments:

Nature (Nature Publishing Group, to be precise) has been aggressively embracing the internet in new and interesting ways. Their main page at nature.com no longer has a list of journals. Instead, journals is just one of many choices (it's at the top, to be sure, and they now have no less than 77), including podcasts, gateways (which aggregate related content across journals), feeds, blogs, jobs, society partners, conferences, regional websites and miscellany (which is creatively titled "launch pad"). It's all a bit unfocused, but much of it is very useful. For example, Connotea is the shared bookmarks site that I settled on after some deliberation and experimentation, and that decision reflects the quality of the site. Nature provides useful tools oriented towards literature citations, the most important of which allow easy capture of bibliographic information (with one annoying bug that involves authors with multiple names) and export of libraries. 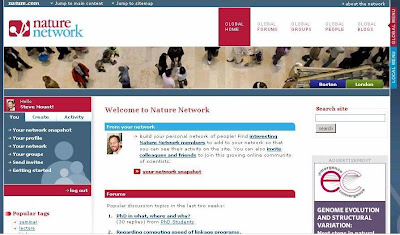 Nature's newest venture is "Nature Network," which is social networking for the scientist. I quickly found and joined groups for people working on bioinformatics, Drosophila and Arabidopsis. I didn't find a group working on splicing, so I created one. Nature Network could be quite useful, but I wonder if it is going to succeed. To do so, it must "catch on," a phenomenon that his hard to predict and depends very much on the site providing useful tools not available elsewhere. Right now, most of what it offers seems redundant, but at the very least it provides a professional alternative to Yahoo groups for ad hoc groups of scientists who want to create an online forum for exchange on a particular topic. One especially interesting choice is the elevation of London and Boston to a special status. I'm sure that Nature Network San Francisco will come soon, but I see lots of problems with this. Would the East Bay have their own Nature Network? I can't wait to find out if New York or Washington will be added first. Where will it end? Recalling the desperate enthusiasm with which I have often seen local politicians embrace biotechnology, I fear that this could get competitive and ugly, even before Nature Network runs out of space on their local menu toolbar.

Of course, the weekly journal is still the keystone of Nature Publishing Group. I have had a personal subscription for over 20 years and I read the journal, in print, every week, bringing it along with me to meals and whatnot. This year, they are being very aggressive about renewals and they're getting it very wrong. My annual renewal expires in September. About a month ago I received a phone call in my office, inviting me to renew. Yes, they called me. Promised a 30% discount, I did so. I renewed online in an attempt to be sure that I generated a renewal of my existing subscription, following the instructions of the person who called me. The result was an entirely new subscription, which expired not in September of 2008, but in July of 2008. I also found that I had three or four customer IDs associated with my account (for only two journals, the other being Nature Genetics). After many rounds of email with their customer service my subscriptions were simplified under a single subscriber number with the proper expiration date. I should emphasize that the replies were prompt, cordial and helpful; the problem is with their system. I assumed that everything was fine, despite the numerous entries on "/myaccount/show/subs," shown here for your amusement. 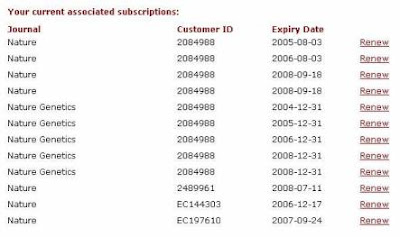 Then, I received two copies of Nature in the mail. Inquiry generated a response that came down to this:

Today, I received an email, from Sarah Greaves, PhD, Publisher, Nature, herself, that read in part

Your current subscription to Nature is now up for renewal. To ensure you don’t miss a single issue, I am pleased to offer you a 30% discount from our normal subscription rate.

This offer expires on SEPTEMBER 27th and is only available online through this email, so act now to ensure you don’t miss out on this exclusive rate.